(aka) The Elephant Sanctuary in Tennessee 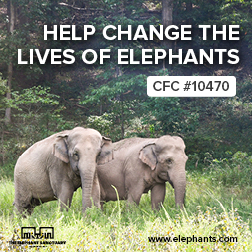 Billie was born wild in India in 1962. Shortly thereafter, in 1966, she was captured, separated from her family, and exported to Southwick Zoo in Mendon, MA. Like most Asian elephants arriving in America during this era, Billie was expected to spend the majority of her life performing and on exhibit.

Billie has made incredible strides at The Sanctuary. In 2011, after five years of protected contact and positive reinforcement at The Elephant Sanctuary, Billie allowed Caregivers to remove her ankle chain - the last vestige of her life as a circus elephant. Today, Billie continues to exhibit increased confidence and bravery as she ventures farther and farther from the areas immediately surrounding her barn - grazing in open meadows, exploring shady forests, and splashing around in the many ponds in her habitat.

There are several ways you can contribute to our mission—and the mission of those all over the world working to develop solutions to the crisis facing elephants and ensure their survival. Speak Out, Shop Smart, Go Green and Travel Responsibly for elephants!

Visit www.elephants.com and sign a pledge to Take Action!